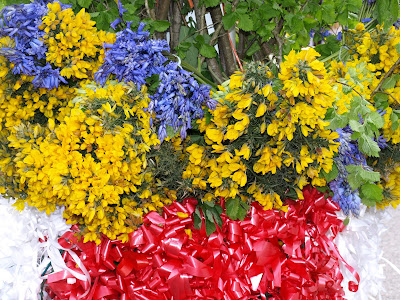 Many villages, hamlets and farms surrounding Bodmin Moor had a peculiar Mayday tradition of the Maypole Battles. At the end of April, each village would choose a stripped fir tree between 30 to 50 foot high and would fasten it to the highest chimney stack at midnight on May eve. Alternatively it would be attached to the highest tree in the vicinity. In the early hours of May Day it was trimmed with streamers of flags made of coloured scraps of material and with flowers and vegetables taken from neighbours gardens. The moment the pole was up and decorated, each village became a fortress, with other rival villages setting off on raids to try to steal the Maypole of the next village. Some villages, such as Merrymeet the pole was cemented in and tarred so it could not be climbed, but the men of St Cleer simply sawed the pole at the base and carried it away! At Trekernal a pole was fastened to the highest tree and decorated in the traditional manner. However it was quickly taken, before dawn,  by a man from North Hill, who climbed the tree with a rope and lowered the pole to the ground.
The May Poles were generally left in position throughout the month of May, and were guarded each night by the men of the village through the entire month. They were then taken down and stored safely until the following year.
Around 150 years ago the biggest Maypole battle  to have been recorded, took place between Altarnun and Trewen.  The folk of Altarnun managed to steal the Trewen pole and this resulted in a fight where it is reported that the villagers “fought like Dragons”. Other villages recorded as having these poles include, Berriow, Middlewood, Menheniot and North Hill.


For a more detailed look at this tradition, watch out for the brand new book 'From Granite to Sea: the Folklore of Bodmin Moor and East Cornwall' by Alex Langstone. Available soon....