The Longstone - A Cornish Legend 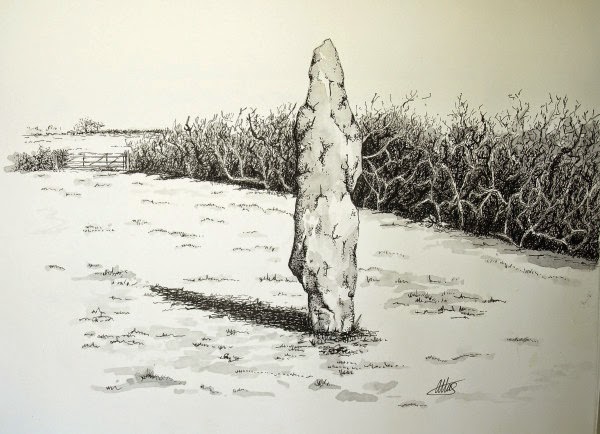 Above: The Longstone © Paul Atlas-Saunders
In the parish of St. Mabyn, in East Cornwall, and on the high road from Bodmin to Camelford, is a group of houses (one of them yet a smith's shop) known by the name of Longstone. The curious traveller passing by inquires the raison d'etre of such a name, for there is no tall monolith, such as are not uncommon in Cornwall, to be seen near it. Let the reason be here fixed on the pages of "N. & Q."
In lack of records, I may say "in the days of King Arthur there lived in Cornwall" a smith. This smith was a keen fellow, who made and mended the ploughs and harrows, shod the horses of his neighbours, and was generally serviceable. He had also great skill in farriery and in the general management and cure of sick cattle. He could also extract the stubbornest tooth, even if the jaw resisted and some gyrations around the anvil were required.
There seems ever to have been ill blood between devil and smith, teste Dunstan and others, and so it was between the fiend and the smith-farrier-dentist of St. Mabyn. At night there were many and fierce disputes between them in the smithy. The smith, as the rustics tell, always got the advantage of his adversary, and gave him better than he brought. This success, however, only fretted old Nick and spurred him on to further encounter. What the exact matter of controversy on this particular occasion was is not remembered, but it was agreed to settle it by some wager, some trial of strength and skill. A two-acre field was near, and the smith challenged the devil to the reaping of each his acre in the shortest time. The match came off, and the devil was beaten; for the smith had beforehand stealthily stuck here and there over his opponent's acre some harrow tines or teeth.
The two started well, but soon the strong swing of the fiend's scythe was being brought up frequently by some obstruction, and as frequently required the whetstone. The dexterous and agile smith went on smoothly with his acre, and was soon unmistakably gaining. The devil, enraged at his certain discomfiture, hurled his whetstone at his rival, and flew off. The whetstone, thrown with great violence, after sundry whirls in the air, fell upright into the soil to a great depth, and there remained a witness against the evil one for ages. The devil avoided the neighbourhood while it stood. In an evil hour the farmer at Treblethick near set his heart upon the Longstone, for there were gate-posts and door-posts to be had out of it, and he threw it down. That night the enemy returned, and has haunted the neighbourhood ever since.
The destroyer of this fine monolith is a near neighbour of mine, who, showing no compunction, tells me that its overthrow was about thirty years ago. It was of granite, and consequently brought hither from a distance, for the local stone is a friable slate. It yielded four large gate-posts, gave spans to a small bridge, and left much granite remaining.
From T Quiller Couch, in Notes and Queries for April 23rd, 1883.
Posted by Alex Langstone at 10:14