The Lost Child of St Allen 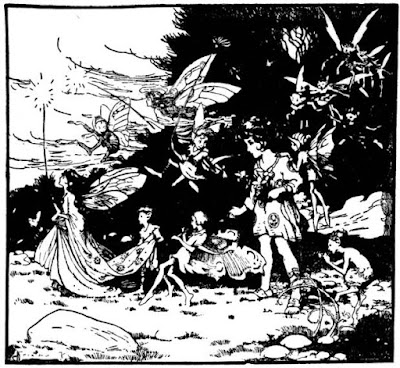 They never talk of fairies in Cornwall; what "foreigners" call fairies the Cornish call "piskies," or " small people." And all about the Duchy piskies still abound for those who are fitted to see them. The old folk will still tell you many strange stories of the piskies. One of the best known is that of the lost child of St. Allen. St. Allen is a parish on the high ground about four miles from Truro, and there, in the little hamlet of Treonike, or, as it is now called, Trefronick, on a lovely spring evening years and years ago, a small village boy wandered out to pick flowers in a little copse not far from his parents' cottage.

His mother, looking from the kitchen door, saw him happily engaged in his innocent amusement, then turned to make ready the supper for her good man, whom she saw trudging home in the distance across the fields. When, a few minutes later, she went to call her boy in to his evening meal, he had vanished...

At first it was thought that the child had merely wandered further into the wood, but after a while, when he did not return, his parents grew alarmed and went in search of him. Yet no sign of the boy was discovered.

For two days the villagers sought high and low for the missing child, and then, on the morning of the third day, to the delight of the distracted parents, their boy was found sleeping peacefully upon a bed of fern within a few yards of the place where his mother had last seen him. He was perfectly well, quite happy, and entirely ignorant of the length of time that had elapsed. And he had a wonderful story to tell.

While picking the flowers, he said, he had heard a bird singing in more beautiful tones than any he had heard before. Going into the wood to see what strange songster this was, the sound changed to most wonderful music which compelled him to follow it. Thus lured onward he came at length to the edge of an enchanted lake, and he noticed that night had fallen but that the sky was ablaze with huge stars. Then more stars rose up all around him, and, looking, he saw that each was in reality a pisky. These small people formed themselves into a procession, singing strange fascinating songs the while, and under the leadership of one who was more brilliant and more beautiful than the rest they led the boy through their dwelling place. This, he said, was like a palace. Crystal pillars supported arches hung with jewels which glistened with every colour of the rainbow. Far more wonderful, the child said, were the crystals than any he had seen in a Cornish mine.

The piskies were very kind to him, and seemed to enjoy his wonder and astonishment at their gorgeous cave. They gave him a fairy meal of the purest honey spread on dainty little cakes, and when at last he grew tired numbers of the small folk fell to work to build him a bed of fern. Then, crowding around him, they sang him to sleep with a strange soothing lullaby, which for the rest of his life he was always just on the point of remembering, but which as certainly escaped him. He remembered nothing more until he was awakened and taken home to his parents.

The wise folk of St. Allen maintained that only a child of the finest character ever received such honour from the small people, and that the fact that they had shown him the secrets of their hidden dwelling augured that for ever afterwards they would keep him under their especial care. And so it was; the boy lived to a ripe old age and prospered amazingly. He never knew illness or misfortune, and died at last in his sleep; and those that were near him say that as he breathed his last a strange music filled the room. Some say that the piskies still haunt the woods and fields around Trefronick, but that they only show themselves to children and grown-ups of simple, trusting nature. Anyhow, those that wish to try to see them may reach the place where the lost child was spirited away in an hour and a half's walk from Truro, Cornwall's cathedral city, which is at the head of one of the most beautiful rivers in the world.

From: Legend Land: Being a Collection of Some of the Old Tales Told in Those Western Parts of Britain Served by the Great Western Railway by George Basil Barham

In the little hamlet of Treonike, in the parish of St Allen, has long lingered the story of a lost child, who was subsequently found. All the stories agree in referring the abduction of the child to supernatural agency, and in some cases it is referred to the "Small People or Piskies," in others, to less amiable spiritual creatures. Mr Hals [a] has given one version of this story, which differs in some respects from the tale as I heard it, from an old woman some thirty years since, who then lived in this parish. Her tale was to the following effect.


It was a lovely evening, and the little boy was gathering flowers in the fields, near a wood. The child was charmed by hearing some beautiful music, which he at first mistook for the song of birds; but, being a sharp boy, he was not long deceived, and he went towards the wood to ascertain from whence the melodious sounds came. When he reached the verge of the wood, the music was of so exquisite a character, that he was compelled to follow the sound, which appeared to travel before him. Lured in this way, the boy penetrated to the dark centre of the grove, and here, meeting with some difficulties, owing to the thick growth of underwood, he paused and began to think of returning. The music, however, became more ravishing than before, and some invisible being appeared to crush down all the low and tangled plants, thus forming for him a passage, over which he passed without any difficulty. At length he found himself on the edge of a small lake, and, greatly to his astonishment, the darkness of night was around him, but the heavens were thick with stars. The music ceased, and, wearied with his wanderings, the boy fell asleep on a bed of ferns. He related, on his restoration to his parents, that he was taken by a beautiful lady through palaces of the most gorgeous description. Pillars of glass supported arches which glistened with every colour, and these were hung with crystals far exceeding anything which were ever seen in the caverns of a Cornish mine. It is, however, stated that many days passed away before the child was found by his friends, and that at length he was discovered, one lovely morning, sleeping on the bed of ferns, on which he was supposed to have fallen asleep on the first adventurous evening. There was no reason given by the narrator why the boy was "spirited away" in the first instance, or why he was returned. Her impression was, that some sprites, pleased with the child's innocence and beauty, had entranced him. That when asleep he had been carried through the waters to the fairy abodes beneath them; and she felt assured that a child so treated would be kept under the especial guardianship of the sprites for ever afterwards. Of this, however, tradition leaves us in ignorance.

[a] See Davies Gilbert's Parochial History of Cornwall.
Posted by Alex Langstone at 04:15