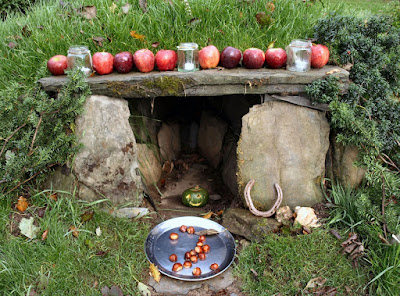 On the nearest Saturday to Hallowe'en, October 31st, the fruiterers of Penzance display in their windows very large apples, known locally as Allan apples. These were formerly bought by the inhabitants and all the country people from the neighbourhood (for whom Penzance is the market-town), and one was given to each member of the family to be eaten for luck. The elder girls put theirs, before they ate them, under their pillows, to dream of their sweethearts. A few of the apples are still sold ; but the custom, which, I have lately been told, was also observed at St. Ives, is practically dying out. On Allantide, at Newlyn West, two strips of wood are joined crosswise by a nail in the centre, at each of the four ends a lighted candle is stuck, with apples hung between. This is fastened to a beam, or the ceiling of the kitchen, and made to revolve rapidly. The players, who try to catch the apples in their mouths, often get instead a taste of the candle.

In Cornwall, as in other parts of England, many charms were tried on Hallowe'en to discover with whom you were to spend your future life, or if you were to remain unmarried, such as pouring melted lead through the handle of the front door key. The fantastic shapes it assumed foretold your husband's profession or trade.

Rolling three names, each written on a separate piece of paper, tightly in the centre of three balls of earth. These were afterwards put into a deep basin of water, and anxiously watched until one of them opened, as the name on the first slip which came to the surface would be that of the person you were to marry.

Tying the front door key tightly with your left leg garter between the leaves of a Bible at one particular chapter in the Song of Solomon. It was then held on the forefinger, and when the sweetheart's name was mentioned it turned round.

Slipping a wedding-ring on to a piece of cotton, held between the  forefinger and thumb, saying, "If my   husband's name is to be let this ring swing ! " Of course, when the name of the person pre- ferred was spoken, the holder unconsciously made the ring oscillate.