Encounter at Dolcoath Mine by John Harris 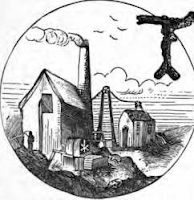 We entered the blacksmith’s shed by the door I have mentioned, which fronted the high road, and had just ﬁnished changing our dress, when we heard a tremendous racket outside. We ran to the door, and there was a little horseman on a night-black nag, galloping furiously in front of the smithy.

In a moment the horse was checked, and back came the rash rider again, sweeping by like the wind. But instead of continuing on the carriage road, the smoking steed dashed over the heaps of rubbish behind the shed, where a horse had never been known to have gone before. Round, and round, and round the shed it rushed at a frantic pace, each time faster than before. as if the weird animal had wings. I could see no whip in the rider’s hand, or bridle-rein—no saddle-stirrup or spur, neither could I discover any face to the horseman. The mystic horse then dashed by us so near that the wind it stirred rushed in our faces. On it went in the very direction of our home, over the road we walked.
The smithy stood in a mineral valley known as Bottom Hill, and its sides were very steep, so that it was no easy task to go up them. The carriage road wound along its side, running on a considerable length until it reached the top. There was, however, a footpath for passengers almost in a direct line from the lowest part of the valley to the very edge of the hill. At the distance of every few yards there were ﬂights of steps, so as to surmount it more easily. But a horse to go up that way would be almost like scaling a cliff. What was our surprise, then, when this hazardous horseman, but a few feet in advance of us, dashed right up over these steps! As he leaped from level to level, and from stone to stone, the black horse seemed standing upright on its hind legs. No sound was heard, no ' crack of whip, no breathing of the jaded beast, but all was still as death.

Of course, the wild horse and its wilder rider reached the high-road on the top of the valley long before we did, though we paced on considerably faster than we were wont. I felt no fear, and hardly expected to see it again, but had resolved that, should it make its appearance, to call out boldly and ask what it wanted. Exactly as we reached the last step of the footpath, which would land us on the main road, there was the black horse and its sooty rider coming full tilt in our faces! I had an opportunity, for a second, to examine the horseman; for by this time the moon had risen, and the light was tolerably good. He seemed as black as ink, armless and legless, and no bigger than a farmer’s watchdog. He was bent forward upon the horse’s neck, so that he was almost double. I could see no face or features of any kind—no whip, or bridle, or saddle-girth. But down he came sweeping like a storm-wave. We stepped quickly aside, and I shouted “Good night!” but there was no reply, no recognition of our presence, or murmur of any kind. On went the black horse galloping into the midnight—on, on! For several minutes we heard the animal’s hoofs rattling and ringing upon the road towards Tuckingmill; and then all was silent, and we saw it no more. What it was I have never discovered to this day—but it was no ghost.

extracted from My Autobiography by John Harris
Posted by Alex Langstone at 06:08