Historic accounts of the Obby Oss in West Penwith

The three accounts below form the basis for our understanding of the West Penwith mid-winter mast style Obby Oss.

"Here was burned a mesquita (Paul church) in which there was a horse carved in wood and greatly embellished, serving as an idol worshipped by the people" (Log of Capt. Carlos de Amezola, 1595)

"Another amusement is called 'The Corn-market' where there is also there is a master who has an assistant called Spy-the-Market; another essential character is old Penglaze who has a blackened face and a staff in his hand, and a person girded round with a horse's hide, or what is supposed to be such, to serve as his horse; they are placed towards the back of the market.
The other players each have some even price appropriated to them for names, as Twopence, Sixpence, Twelvepence, etc. The master then calls 'Spy-the-master', to which the man replies, 'Ay, sirrah.' The master the asks the price of corn. The man names some price that is borne by one of the players as, for instance, 'Twopence'. The master then holds the same conversation with Twopence as he had with his man, and so on till some mistake is made by any of the party not answering to his name, when the unlucky offender is to be sealed, which constitutes the principal amusement of the game. The master than goes up to the delinquent and, taking up his foot, says: 'Here is my seal, where is old Penglaze's seal?' and gives him a blow on the foot. Old Penglaze then comes in on his horse which winces and capers about grotesquely. He is told that a fine colt needs shoeing, for which he says that his full reward is a full gallon of moonlight besides all other customs for shoeing in that market. The shoe of the 'colt' is than taken off and Penglaze gives him one or two hard blows on the sole of the foot, after which he rides off again, his horse capering more than ever and sometimes throwing the old gentleman off." (Sandys: "Cornish Carols Ancient and Modern", 1833, in respect of West Cornwall) 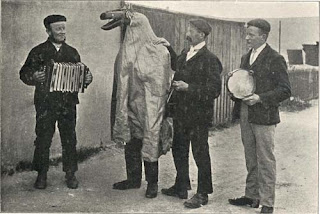 Above: The Walmer hooden oss from Kent. Taken in 1907, this may be similar in style to the accound that William Sandys gives of the Penzance Oss.

"A well-known character amongst them, about 50 years ago, was the hobby-horse, represented by a man carrying a piece of wood in the form of a horse's head and neck, with some contrivance for opening and shutting the mouth with a loud snapping noise, the performer being so covered with a horse-cloth or hide of a horse as to resemble the animal whose curvetings, biting and other motions he imitated." (R. Edmonds, "The Land's End District", 1862, re. the Christmas to Twelve-Tide geese (guise) dancers).

With thanks to Craig Weatherhill for bringing the texts together. 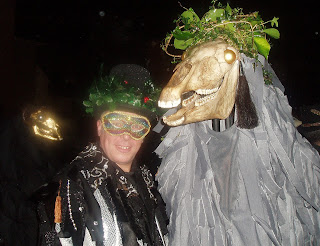 Above: The modern Cornish mast-beast style of Oss, still very much associated with mid-winter traditions across Cornwall