How Jan Brewer was Piskey-laden 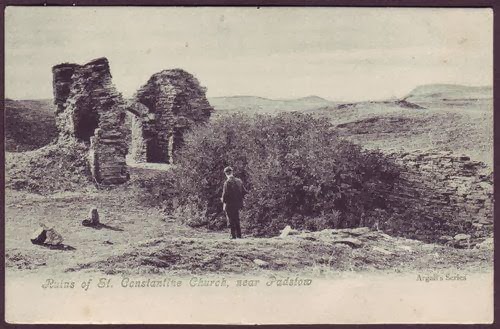 THE moon was near her setting as a tall, broad-shouldered man called Jan Brewer was walking home to Constantine Bay to his cottage on the edge of a cliff.

He was singing an old song to himself as he went along, and he sang till he drew near the ruins of Constantine Church, standing on a sandy common near the bay. As he grew near the remains of this ancient church, which were clearly seen in the moon-
shine, he thought he heard someone laughing, but he was not quite sure, for the sea was roaring on the beach below the common, and the waves were making a loud noise as they dashed up the great headland of Trevose.

' I was mistaken ; 'twas nobody laughing,' said Jan to himself, and he walked on again, singing as before ; and he sang till he came near a gate, which opened into a field leading to his cottage, but when he got there he could not see the gate or the gateway.

' I was so taken up with singing the old song, that I must have missed my way,' he said again to himself. ' I'll go back to the head of the common and start afresh,' which he did ; and when he got to the place where his gate ought to have been, he could not find it to save his life.

' I must be clean mazed,' he cried. ' I have never got out of my reckoning before, nor missed finding my way to our gate, even when the night has been as dark as pitch. It isn't at all dark to-night ; I can see Trevose Head '-looking across the bay 'and yet I can't see my own little gate ! But I en't a-going to be done ; I'll go round and round this common till I do find my gate.'

And round and round the common he went, but find his gate he could not.

Every time he passed the ruins of the church a laugh came up from the pool below the ruins, and once he thought he saw a dancing light on the edge of the pool, where a lot of reeds and rushes were growing.

' The Little Man in the Lantern is about to-night he said to himself, as he glanced at the pool. ' But I never knew he was given to laughing before.'

Once more he went round the common, and when he had passed the ruins he heard giggling and laughing, this time quite close to him ; and looking down on the grass, he saw to his astonishment hundreds of Little Men and Little Women with tiny lights in
their hands, which they were Sinking t about as they laughed and giggled.

The Little Men wore stocking-caps, the colour of ripe briar berries, and grass-green coats, and the Little Women had on old grandmother cloaks of the same vivid hue as the Wee Men's coats, and they also wore fascinating little scarlet hoods.

' I believe the great big chap sees us,' said one of the Little Men, catching sight of Jan's astonished face. ' He must be Piskey-eyed, and we did not know it.'

' Is he really?' cried one of the Dinky Women. ' Tis a pity,' as the Little Man nodded. ' But we'll have our game over him all the same.'

' That we will,' cried all the Little Men and Little Women in one voice : and, forming a ring round the great tall fellow, they began to dance round him, laughing, giggling, tehoing, and flashing up their lights as they danced. 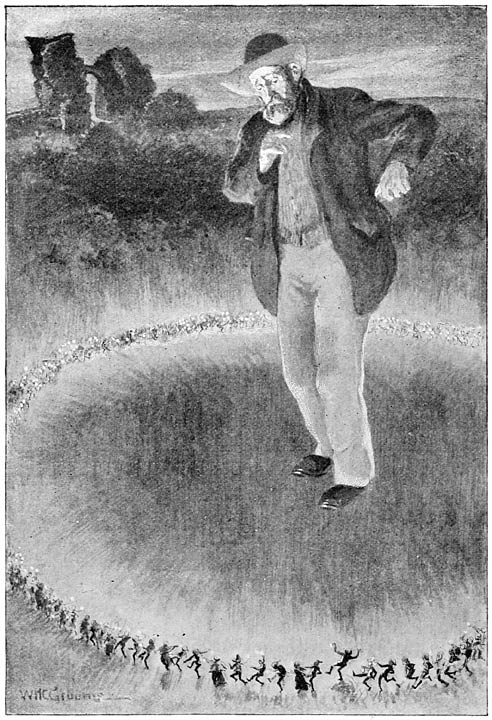 They went round him so fast that poor Jan was quite bewildered, and whichever way he looked there were these Little Men and Little Women giggling up into his bearded face. And when he tried to break through their ring they went before him and behind him, making a game over him, he said !

He was at their mercy and they knew it ; and when they saw the great fellow's misery, they only laughed and giggled the more.

' We've got him !' they cried to each other, and they said it with such gusto and with such a comical expression on their tiny brown faces, that Jan, bewildered as he was, and tired with going round the common so many times, could not help laughing, they looked so very funny, particularly when the Little Women winked up at him from under their little scarlet hoods.

The Piskeys for they were Piskeys hurried him down the common, dancing round him all the time ; and when he got there he felt so mizzy-mazey with those tiny whirling figures going round and round him like a whirligig, that he did not know whether he was standing on his head or his heels. He was also in a bath of perspiration ' sweating leaking,' he expressed it and, putting his hand in his pocket to take out a handkerchief to mop his face, he remembered having been told that, if ever he got Piskey-laden, he must turn his coat pockets inside out, when he would be free at once from his Piskey tormentors. He immediately acted on this suggestion, and in a minute or less his coat-pockets were hanging out, and all the Little Men and the Little Women had vanished, and there, right in front of him, he saw his own gate ! He lost no time in opening it, and in a very short time was in his thatched cottage on the cliff. 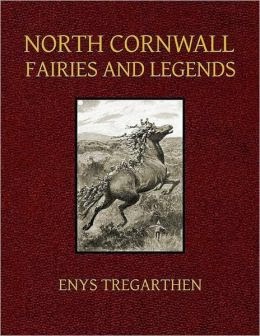