The Hound of St Blazey 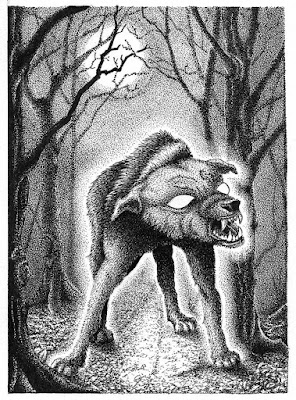 Samuel Drew (1765-1833) was a self taught man of letters; his special interest was metaphysics, which is perhaps why he is little known now. He was apprenticed to a shoemaker, and gave the following account of a childhood experience.

'There were several of us, boys and men, out about twelve o'clock on a bright moonlit night. I think we were poaching. The party were in a field adjoining the road leading from my master's to St Austell, and I was stationed outside the hedge to watch and give the alarm if any intruder should appear. While thus occupied I heard what appeared to be the sound of a horse approaching from the town, and I gave a signal. My companions paused and came to the hedge where I was, to see the passenger [passer-by]. They looked through the bushes, and I drew myself close to the hedge, that I might not be observed. The sound increased and the supposed horseman seemed drawing near. The clatter of the hoofs became more and more distinct.

'We all looked to see who and what it was, and I was seized with a strange, indefinable feeling of dread; when, instead of a horse, there appeared, coming towards us, at an easy pace, but with the same sound that first caught my ear, a creature about the height of a large dog. It went close by me, and as it passed, it turned upon me and my companions huge fiery eyes that struck terror to all our hearts. The road where I stood branched off in two directions, in one of which there was a gate across. Towards the gate it moved, and, without any apparent obstruction, went on at its regular trot, which we heard several minutes after it had disappeared. Whatever it was, it put an end to our occupation, and we made the best of our way home.

'I have often endeavoured in later years, but without success, to account on natural principles for what I then heard and saw. As to the facts, I am sure there was no deception. It was a night of unusual brightness, occasioned by a cloudless full moon. The creature was unlike any animal I had then seen, but from my present recollections it had much the appearance of a bear, with a dark shaggy coat. Had it not been for the unearthly lustre of its eyes, and its passing through the gate as it did, there would be no reason to suppose it anything more than an animal escaped perhaps from some menagerie. That it did pass through the gate without pause or hesitation I am perfectly clear. Indeed, we all saw it, and saw that the gate was shut, from which we were not distant more than twenty or thirty yards. The bars were too close to admit the passage of an animal of half its apparent bulk; yet this creature went through with out effort or variation of its pace"

The road referred to is in all likelihood that known as Trenowah Road which runs between Tregrehan Mills and St Austell. Samuel Drew was born in 1765 so the incident probably occurred towards the end of the 1770s.