The Witches of the Logan Stone 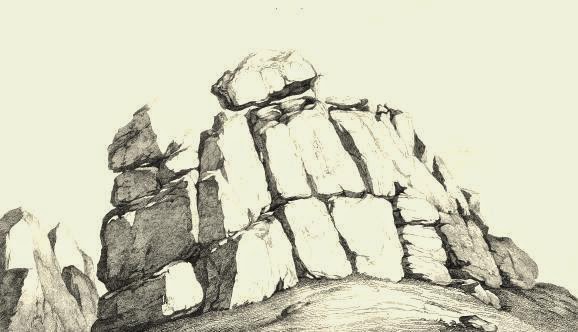 WHO that has travelled into Cornwall but has visited the Logan Stone ? Numerous Logan rocks exist on the granite hills of the county, but that remarkable mass which is poised on the cubical masses forming its Cyclopean support, at Trereen, is beyond all others "The Logan Stone."

A more sublime spot could not have been chosen by the Bardic priesthood for any ordeal connected with their worship; and even admitting that nature may have disposed the huge mass to. wear away, so as to rest delicately poised on a pivot, it is highly probable that the, wild worship of the untrained tribes, who had passed to those islands' from the shores of the Mediterranean Sea, may have led them to believe that some' superhuman power belonged to such a strangely-balanced mass of rock.

Nothing can be more certain than that through all time, passing on from father to son, there has been a wild reverence of this mass of rock; and long after the days when the Druid ceased to be there is every reason for believing that the Christian priests, if the) did not encourage, did not forbid, the use of this and similar rocks to be used as places of ordeal by the uneducated and superstitious people around.
Hence the mass of rock on which is poised the Logan Stone has ever been connected with the supernatural. To the south of the Logan Rock is a high peak of granite, towering above the other rocks; this is known as the Castle Peak.

No one can say for how long a period, but most certainly for ages, this peak has been the midnight rendezvous for witches, Many a man, and woman too, now sleeping quietly in the church yard of St Levan, would, had they the power, attest to have seer the witches flying into the Castle Peak on moonlight nights mounted on the stems of the ragwort (Senecia Jacoboea Linn.) and bringing with them the things necessary to make their charms potent and strong.

This place was long nøted as the gathering place of the army of witches who took their departure for Wales, where they would luxuriate at the most favoured seasons of the year upon the mill of the Welshmen's cows. From this peak many a struggling ship has been watched by a malignant crone, while she has been brewing the tempest to destroy it; and many a rejoicing chorus has been echoed, in horror, by the cliffs around, when the witches have been croaking their miserable delight over the perishing crews, as they have watched man, woman, and child drowning whom they were presently to rob of the treasures they were bringing home from other lands.

Upon the rocks behind the Logan Rock it would appear that every kind of mischief which can befall man or beast was once brewed by the St Levan witches.

from Popular Romances by Robert Hunt
Posted by Alex Langstone at 13:26