The Witch and the Toad 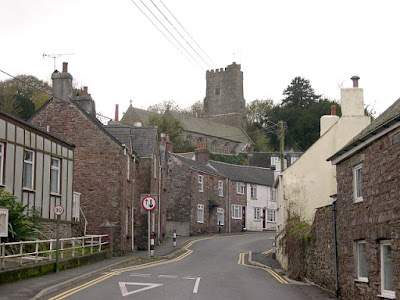 An old woman called Alsey, usually Aunt Alsey occupied a small cottage in Anthony, one of a row which belonged to a tradesman living in Dock; as Devonport was then designated to distinguish it from Plymouth. The old woman possessed a very violent temper, and this, more than anything else, fixed upon her the character of being a witch. Her landlord had frequently sought his rent, and as frequently he received nothing but abuse. He had, on the special occasion to which our narrative refers, crossed the Tamar and walked to Anthony, with the firm resolve of securing his rent, now long in arrear, and of turning the old termagant out of the cottage. A violent scene ensued, and, the vicious old woman, more than a match for a really kind-hearted and quiet man, remained the mistress of the situation. She seated herself in the door of her cottage and cursed her landlord's wife, "the child she was carrying," and all belonging to him, with so devilish a spite that Mr--owned he was fairly driven away in terror.

On returning home, he, of course, told his wife all the circumstances; and while they were discoursing on the subject, the whole story being attentively listened to by their daughter, then a young girl, who is my informant, a woman came into the shop requiring some articles which they sold.

"Sit still, father," said Mrs--to her husband; "you must be tired. I will see to the shop."

So she went from the parlour, into the shop, and, hearing the wants of her customer, proceeded  to supply them; gossiping gaily, as was her wont, to interest the buyer.

Mrs--was weighing one of the articles required, when something falling heavily from the ceiling of the shop, struck the beam out of her hand, and both the falling body and the scales came together with much noise on to the counter. At the same instant both women screamed; the shopkeeper calling also "Father ! father ! " meaning her husband thereby with great energy.

Mr--and his daughter were in the shop instantly, and there, on the counter, they saw an enormous and most ugly toad sprawling amidst the chains of the scales. The first action of the man was to run back to the parlour, seize the tongs, and return to the  shop. He grasped the swollen toad with the tongs, the vicious creature spitting all the tithe, and, without a word, he went back and flung it behind the block of wood which was burning in the grate. The object of terror being removed, the wife, who was shortly to become the mother of another child, though usually a woman who had great command over her feelings, fainted.

This circumstance demanding all their attention, the toad was forgotten. The shock was a severe one; and although Mrs--was restored in a little time to her senses, she again and again became faint. Those fits continuing, her medical attendant, Dr--was sent for, and on his arrival he ordered that his patient should be immediately placed in bed, and the husband was informed that he must be prepared for a premature birth.

The anxiety occasioned by these circumstances, and the desire to afford every relief to his wife, so fully occupied Mr --, that for an hour or two he entirely forgot the cause of all this mischief; or, perhaps satisfying himself that the toad was burnt to ashes, he had no curiosity to look after it. He was, however, suddenly summoned from the bedroom, in which he was with his wife, by his daughter calling to him, in a voice of terror "O father, the toad, the toad!”

Mr--rushed down-stairs, and he then discovered that the toad, though severely burnt, had escaped destruction. It must have crawled up over the log of wood, and from it have fallen down amongst the ashes. There it was now making useless struggles to escape, by climbing over the fender.

The tongs were again put in requisition, with the intention this time of carrying the reptile out of the house. Before, however, he had time to do so, a man from Anthony came hastily into the shop with the information that Aunt Alsey had fallen into the fire, as the people supposed, in a fit, and that she was nearly burnt to death. This man had been sent off with two commissions one to fetch the doctor, and the other to bring Mr--with him, as much of the cottage had been injured by fire, communicated to it by the old woman's dress.

In as short a time as possible the parish surgeon and Mr --. were at Anthony, and too truly they found the old woman most severely burnt; so seriously, indeed, there was no chance that one so aged could rally from the shock which her system must have received, however, a litter was carefully prepared, the old woman was placed in it, and carried to the workhouse. Every attention was given to her situation, but she never recovered perfect consciousness, and during the night she died.

The toad, which we left inside the fender in front of a blazing fire, was removed from a position so trying to any cold-blooded animal, by the servant, and thrown, with a "hugh "and a shudder, upon one of the flower-beds in the small garden behind the house.

There it lay the next morning dead and when examined by Mr --, it was found that all the injuries sustained by the toad corresponded with those received by the poor old wretch, who had no doubt fallen a victim to passion.

As we have only to deal with the mysterious relation which existed between the witch and the toad, it is not necessary that we should attend further to the innocent victim of an old woman's vengeance, than to say that eventually a babe was born that that babe grew to be a handsome man, was an officer in the navy, and having married, went to sea, and perished, leaving a widow with an unborn child to lament his loss. Whether this was a result of the witch's curse, those who are more deeply skilled in witchcraft than I am, may perhaps tell.

From Popular Romances of the West of England by Robert Hunt
Posted by Alex Langstone at 08:18