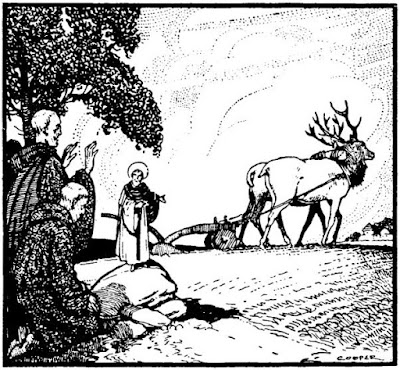 Of all the vast company of saints peculiar to Cornwall, St. Neot is surely the strangest, for he was, so the old traditions have it, a pigmy, perfectly formed, yet only fifteen inches in height. There are very many stories told of this tiny holy man, and most of them seem to show that he wielded a great power over all animals.

One of the prettiest stories is of the time when St. Neot presided over his abbey and there came one night thieves to the monastic farm and stole all the monks' plough oxen. The poor brothers had not the money to purchase other beasts, and seed-time was upon them with their fields yet un-ploughed. Ruin seemed certain until the good little abbot appealed to the wild beasts to come to their aid. And then, to the amazement of the monks, there came from the surrounding forests wild stags, who docilely offered their necks to the yoke and drew the heavy ploughs. Each night the stags were released, and they went off to the woods; but each succeeding morning they returned to continue their task.

The news of this miraculous happening spread rapidly abroad and came at last to the ears of the thieves. They were so deeply impressed by the story that they returned the stolen oxen at once and promised never again to pursue their evil ways. So the stags were released from their self-appointed labour, but ever after, they say, each bore a white ring like a yoke about its neck, and each enjoyed a charmed life, for no arrow or spear of a hunter could hurt it.

Another story that is told is that of St. Neot and the hunted doe. While the good saint was seated in contemplation by his well, there burst from the woods a doe pursued by hounds and huntsmen. The poor beast was exhausted and sank down by the saint as if imploring his protection.

The tiny saint rose and faced the oncoming pack, which instantly turned and dashed back into the forest. Presently the huntsmen approached with drawn bows, prepared to dispatch the frightened quarry. But they too, at the sight of the saint, desisted, and the chief of them, falling upon his knees, cast away his quiver and besought the Holy Neot to receive him into the Church.

This man, they say, became a monk at the monastery of St. Petroc at Bodmin, and the hunting-horn which he carried on the day of his conversion was hung for many years in St. Neot's church.Many of the stories of this saint are depicted in the mediæval stained-glass windows of the parish church of St. Neot, a pretty village nestling under the southern slopes of the Bodmin Moor. This church has one of the finest sets of fifteenth and sixteenth century painted windows in the country, which rival the famous Fairford glass in Gloucestershire.

St. Neot is easily reached by road from Bodmin or Liskeard, or from Doublebois station, on the main line, from which it is distant about three miles. The village lies in a sheltered valley surrounded by charming wooded country, and from it you may reach, only a short distance away, the edge of wild Bodmin Moor itself.

Bodmin, an attractive yet—by the tourist—much neglected town, is some seven miles away. Bodmin, the capital of Cornwall, is a quiet, sleepy old town ideally situated as a centre from which to reach many parts of the Duchy. Midway between the two coasts, with a good rail service to either, and close to the wild moorland that bears its name, this town is rich in history.

The moor with its two Cornish mountains, Brown Willy and Rough Tor (which you must pronounce to rhyme with "plough"), is easily reached, and the rail will take you to Wadebridge or Padstow on the rugged north coast; or south to sheltered Fowey—the Troy Town of "Q"—for an afternoon's excursion. 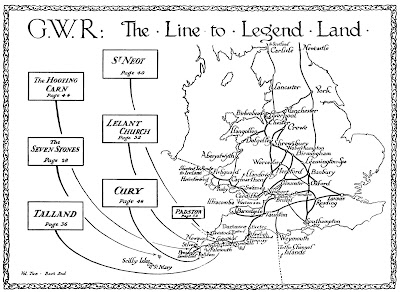