The Black Dog of Tregrehan

It was a clear moonlit night in the narrow lanes at Tregrehan Mills, and a clandestine group of men were out poaching. Close to midnight they had gathered at an isolated trackway on the edge of the hamlet, not far from the boundary of the large estate owned by Lord Carlyon. Most of the men had cut across the fields from St Blazey, Boscoppa and Par and now gathered in the shadows of the ancient hedge. The old lane was brightly lit by the moon, and all was quiet.

One of the lads, a mere boy, was told to keep guard by the granite hedge, whilst the older men quickly dispersed in the neighbouring fields, looking for deer tracks under the soft silver light of the full moon. Sam was on the lookout for any intruders, and he had been instructed to raise the alarm if any strangers appeared in the vicinity. Though nervous, he was a seasoned lookout, and had been on many night-time errands before, be they poaching at Tregrehan or smuggling at Par. If it wasn’t for these activities, Sam knew they would probably be starving, so it was all part of his regular routine. 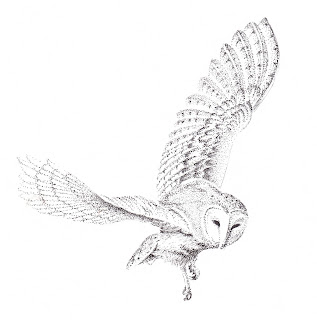 Artwork copyright Paul Atlas-Saunders
Shortly after, Sam thought he heard a horse approaching, and he drew himself closer to the dark shadows cast by the tall hedge. He listened again, but the clattering sound had ceased. An owl hooted from the tree tops and another responded, their eerie avian conversation seemed to hang on the night air, in this ancient Cornish lane.

Sam’s senses suddenly heightened, as again he heard the clatter of a horse approaching. This time he raised the alarm, as they could ill afford to be caught trespassing, let alone poaching. As his companions drew close to the shadows of the hedge, the sound grew louder., and the noisy clatter of hooves became much more distinct. They were all intrigued to see who was riding out so noisily on this fine moonlit night. However, a dire feeling of dread came over them all, as a very strange apparition manifested before them. Instead of a horse, there appeared a huge furry black beast, which looked like a large dog or small bear.

As the creature passed by the group, they all witnessed the wild monster with his demonic fiery eyes and large teeth, which struck terror into their hearts. What was this uncanny beast? Furthermore, the strange creature walked straight through a wooden gate, without any obstruction, as if it were a ghostly apparition or maybe a demon straight from hell.

Beyond the sturdy wooden gate, the strange black dog trotted off into the fields beyond. The men watched its monstrous spectral illuminated form for several minutes, and they continued to hear the strange nightmarish clattering of the ghost dog’s hoof-like paws, which gradually seemed to fade into the disturbing shadows of the trees on the far side of the pasture.

The poachers decided to call it a night, and as they dispersed into smaller groups to head for their homes, the conversation was of confusion and fear, as they tried to understand what they had all witnessed in the lush fields and ancient woodlands of Tregrehan Mills on that fateful and haunted moonlit night. 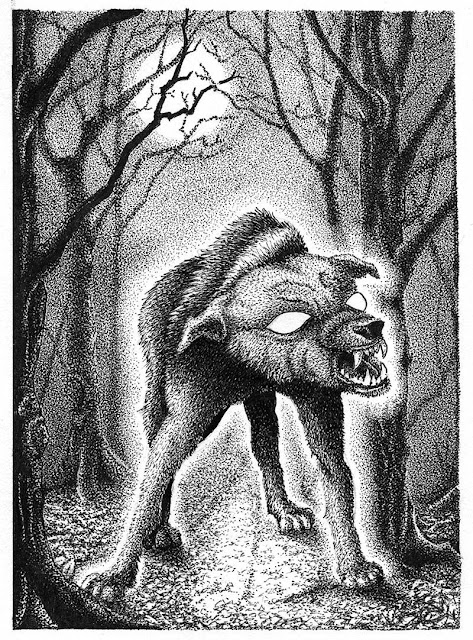 This piece was first published in Lien Gwerin no. 2
Posted by Alex Langstone at 02:25