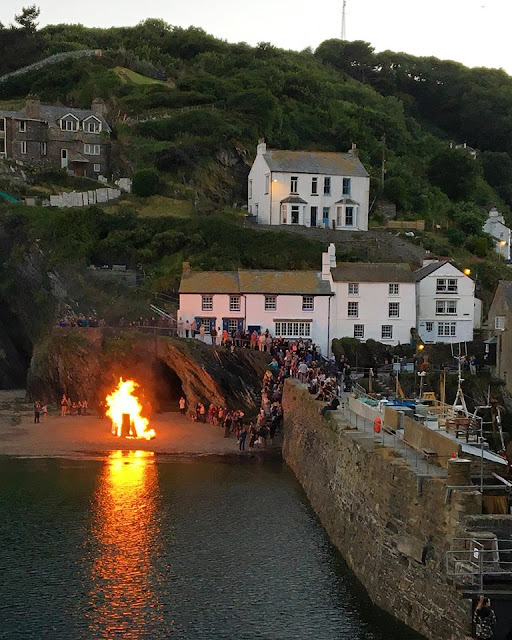 "On the eve of the fair is the prefatory ceremony of a bonfire. The young fishermen go from house to house and beg money to defray the expenses. At night-fall a large pile of faggots and tar-barrels is built on the beach, and amid the cheers of a congregated crowd of men, women and children, (for it is a favour never denied to children to stay up and see the bonfire), the pile is lighted. The fire blazes up, and men and boys dance merrily round it, and keep up the sport till the fire burns low enough, then they venturously leap through the flames. It is a most animated scene; the whole valley lit up by the bright red glow, bringing into strong relief front and gable of picturesque old houses, each window crowded with eager and delighted faces; while around the fire is a crowd of ruddy lookers-on, shutting in a circle of impish figures leaping like salamanders through the flames. The fire was no doubt, originally intended to celebrate the solstitial feast, but was in later times, deferred until the festival of St Peter".
Posted by Alex Langstone at 08:03