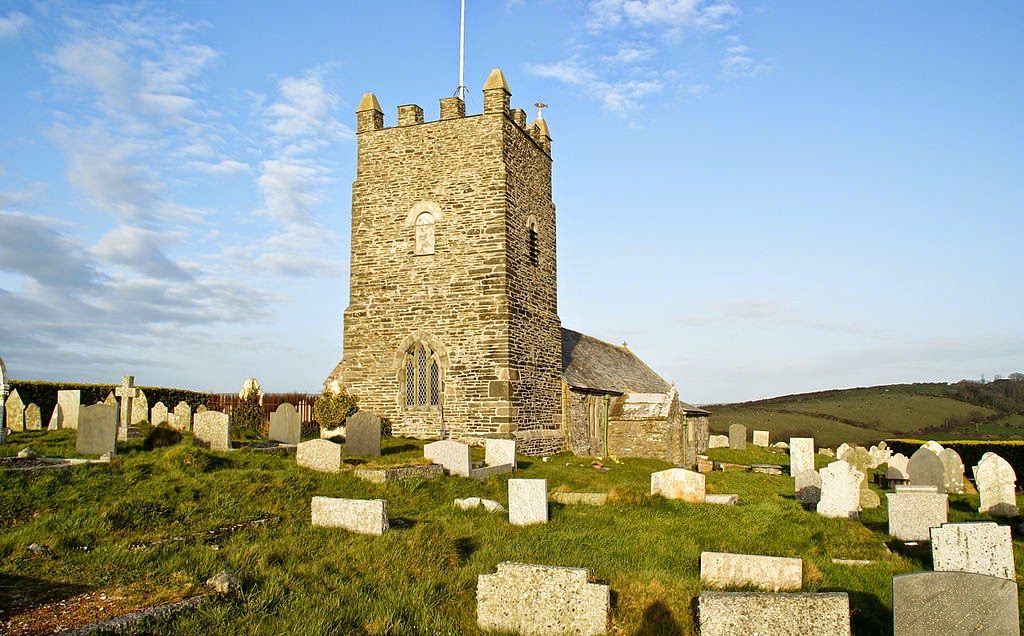 TO this day the tower of Forrabury Church, or, as it is called by Mr Hawker, "the silent tower of Bottreaux," remains without bells. "At Forrabury the chimes have never sounded for a marriage, the knell has never been heard for a funeral." --Collins.

In days long ago, the inhabitants of the parish of Forrabury--which does not cover a square mile, but which now includes the chief part of the town of Boscastle and its harbour--resolved to have, a peal of bells which should rival those of the neighbouring church of Tintagel, which are said to have rung merrily at the marriage, and tolled solemnly at the death, of Arthur.

The bells were cast; the bells were blessed; and the bells were shipped for Forrabury. Few voyages were more favourable; and the ship glided, with a fair wind, along the northern shores of Cornwall, waiting for the tide to carry her safely into the harbour of Bottreaux.

The vesper bells rang out at Tintagel; and the pilot, when he heard the blessed sound, devoutly crossed himself, and bending his knee, thanked God for the safe and quick voyage which they had made.

The captain laughed at the superstition of the pilot, as he called it, and swore that they had only to thank themselves for the speedy voyage, and that, with his arm at the helm, and his judgment to guide them, they should soon have a happy landing. The pilot checked this profane speech; but the wicked captain--and he swore more impiously than ever that all was due to himself and his men--laughed to scorn the pilot's prayer. "May God forgive you !" was the pilot's reply.

Those who are familiar with the northern shores of Cornwall will know that sometimes a huge wave, generated by some mysterious power in the wide Atlantic, will roll on, overpowering everything by its weight and force.

'While yet the captain's oaths were heard, and while the inhabitants on the shore were looking out from the cliffs, expecting, within an hour, to see the vessel, charged with their bells, safe in their harbour, one of these vast swellings of the ocean was seen. Onward came the grand billow in all the terror of its might. The ship rose not upon the waters as it came onward. She was overwhelmed, and sank in an instant close to the land.

As the vessel sank, the bells were heard tolling with a muffled sound, as if ringing the death-knell of the ship and sailors, of whom the good pilot alone escaped with life.

When storms are coming, and only then, the bells of Forrabury, with their dull, muffled sound, are heard from beneath the heaving sea, a warning to the wicked; and the tower has remained to this day silent.

From Popular Romances of the West of England by Robert Hunt
‘The Silent Tower of Bottreaux.’
The pilot heard his native bells
hang on the breeze in fitful swells.
‘Thank God’ with reverent brow he cried,
‘We make the shore on evening’s tide.’
‘Come to thy God in time.’
It was his marriage chime.
Youth, manhood, old age past,
his bells must ring at last.

‘Thank God, thou whining knave, on land
but thank at sea the steersman’s hand’,
the captain’s voice above the gale,
‘Thank the good ship and ready sail.’
‘Come to thy God in time.’
Sad grew the boding chime.
‘Come to thy God at last.’
Boomed on the heavy blast.

Up rose the sea as if it heard
the Mighty Master’s signal word.
What thrills the captain’s whitening lip?
The death groans of his sinking ship.
‘Come to thy God in time.’
Swung deep the funeral chime.
Grace, mercy, kindness past,
‘Come to thy God at last.’

Long did the rescued pilot tell,
when greying hairs o’er his forehead fell,
while those around would hear and weep,
that fearful judgement of the deep.
‘Come to thy God in time.’
Swung the deep funeral chime,
he read his native chime,
youth, manhood, old age past,
his bell rung out at last.

Still when the storm of Bottreau’s waves
is wakening in his weedy caves,
those bells that sudden surges hide
peal their deep notes beneath the tide.
‘Come to thy God in time.’
Thus saith the ocean’s chime.
‘Storm, billow, whirlwind past,
come to thy God at last.